The second part of this pilgrimage series is about both Foswert and Hegebeintum. Hegebeintum is the highest terp (artificial mound) in the Netherlands. It was once considered a part of Foswert and was a holy site long before Christian times, so it seems fair to write about both places. 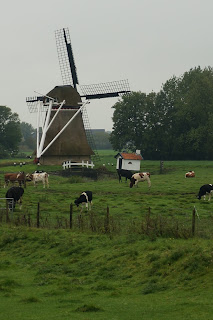 Foswert is named after Fosite (Forseti) and lies close by a small village, Wânswert, which is similarly named after the Frisian equivalent of Odin. It was a drizzly, overcast day on September 16, 2015, when I set off for Foswert by bike. My route took me through Wânswert, which apparently was so tiny that it did not even have shops of its own. The town's terp overlooked a pleasant field with a picturesque thatched windmill. There was a church built atop the terp. I walked around outside the iron fence encircling the church's graveyard and took in the views. I did get a very faint sense of power off the place and could imagine, dimly, Weda (Odin) once being hailed up there among the trees.

When I reached the other side of Wânswert, I wasn't sure which direction to strike out in next. A friendly postal worker pointed out the street leading to Foswert. This part of the journey made for nervous riding at first, as there was no separate bike route. Usually, bikes have their own lanes or trails in the Netherlands. I had to share the road with drivers impatient to get to their own destinations. Fortunately, a paved bike path (It Kleaster) later branched off the highway. The rest of the trip to Foswert was more peaceful.

Unlike the holy spring on Ameland, Foswert is not really set apart for visitors. It was once the site of a Benedictine cloister, but that burned down long ago. Only two poles on either side of a roadway leading to private milk farms mark the place now. A small sign describes the history. There were some Friesian horses out in the fields next to the posts, and they paused to stare at me while I took pictures. I did not go very far down the road into what had once been Foswert. A small, nondescript pond with some nice flowers was on the right, and a sparse grove of trees on the left. The road split just behind these, going straight to the milk farms. It was not the sort of place to pause and meditate.

I returned to the entrance. Across from the two Foswert posts, a small, concrete bridge spanned over a canal. Feathery reeds grew next to it. There, I poured Fosite an offering of Kasteel Donker (which is a truly excellent beer, by the way). After that, I cycled up to Ferwert. Ferwert did not turn out to be the most scenic of Frisian towns. It is more geared towards agricultural businesses.

I visited Hegebeintum on September 20, 2015, more by accident than by any exact planning. Following a whim, I'd biked up to the dikes and even stumbled upon places where Ameland was visible from the mainland, such as the Marrum "Dike Temple." I happened to take a return-route that went past Hegebeintum, so I had a chance to stop there. The terp is dominated by what was once a very wealthy church. It is definitely worth paying the extra three euros for an inside tour. They also have a small exhibit of locally discovered artifacts, including ones from Heathen times: rings; four-sided, triangular bone Donarhangers like the one pictured here; and even an axe pendant. I could only wonder if, long ago, one of Fosite's previous devotees had worn the axe.

After ending up at Hegebeintum, I rode by Foswert one last time on the way back. That evening, it was sunny out. The strong Friesian horses still grazed in the field and the sun was shining over the De Traan canal on Foswert's southern side, where a lone yellow lily bloomed. For a moment, the modern world seemed to fade away. 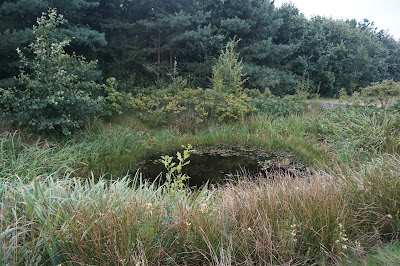 The date is September 12, 2015. Feeling somewhat chilled and footsore, I stand before the counter at the Ameland VVV--the island's visitors' center--holding what seems to be a simple piece of paper. The kindhearted employee has just handed me a photocopied map of the town of Nes. On the north-east corner, just outside of town, she's drawn a circle representing the "Willibrordsdobbe." I thank her in my bad Dutch and make sure that it's all right to keep the map. "Of course," she assures me.

The day's been gray and overcast, but at least it's not raining. My bike is parked back in town center, so I walk through residential areas, following the map until I reach the end of a street. There's a parking lot to the left and a cemetery wall to the right. I'm not sure where to go next. Fortunately, what appear to be two park employees in florescent jackets are talking nearby. When I ask about the Willibrordsdobbe, they point down a paved path with easy assurance. The walk is a short one: I'd been closer to the spring than I realized. 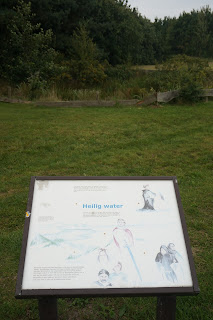 Off to the right, dun-colored ponies graze on a small hillside. Sporting fields and skateboard ramps dominate the left side, empty that day. There's a large racing event going on by the local windmill, and I suspect it's keeping the crowds down here. The spring itself is tucked in between the playing fields and a line of thick conifers, and is surrounded by a low, wooden fence. The waters are still and speckled with a few autumn leaves. It's more of a pool or a small pond than the flowing, crystalline spring of imagination. But seeing it is no less a thrill. I stop to take pictures of the sign that's been put up to mark the site and am gratified to see a mention of Fosite (Forseti). 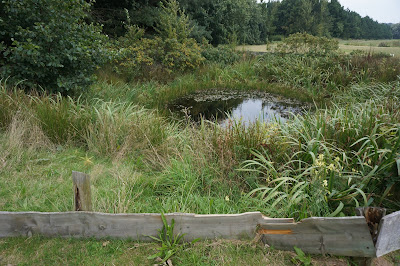 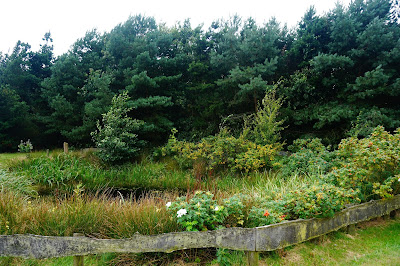 I take more pictures of the pool, from outside the fence only. What lies within that boundary is holy ground. A carved wooden frog sculpture stands close to a gap in the fence where the traces of a trail leading down to the water are visible. I briefly wonder what my God thinks of the carving. Frogs? I circle the perimeter of the fence, quietly impressed by the sheer diversity of plant life around the pool. Reeds and a pair of small trees; rowans with crimson berries; the gaily red fruits of rose hips, and their white and magenta blossoms. It's a natural garden with many representatives of the island's flora. 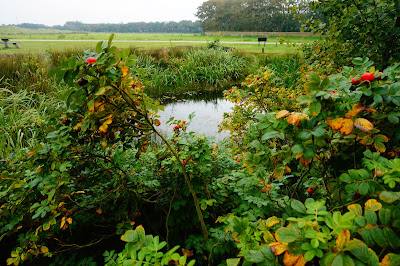 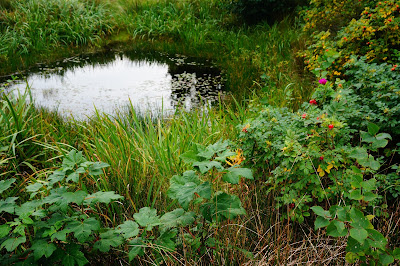 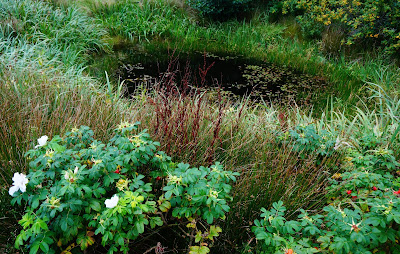 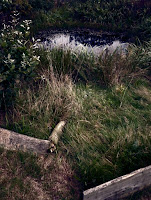 Finally setting the camera aside, I pause and meditate in the back near the trees, then return to the front of the spring and wait for a cyclist to pass. Some instinct compels me to take my shoes off before stepping between the wood slats.

The path down to the water is narrow, made softer by pressed-down reeds. The edge is muddy and I can see mossy green bits of algae in the water. I renew an oath and consecrate something I've brought with me.

I'm reluctant to leave, but the day is growing late and the skies are dark. The waters are silent, sheltered among reeds, bushes, and trees. It's time to go back to town.

Addendum - A Family Goes Through Hospice

Looking back, stepping away from this blog early in 2014 was a timely decision. For those who enjoyed reading Lagutyr in the past, however, I would like to provide an addendum:

The past year was a year of death. It started with the spring and summer losses of two pets I'd had nearly fifteen years. Later in the summer, my father began his final decline before passing away from cancer towards the end of the year. A lot fell onto my shoulders during this time, including making arrangements for my mother (who has severe schizophrenia) to be moved to a safe environment, planning for her trust, and helping my father with bills and setting up in-home care as his strength rapidly faded. He was a very independent person who kept so much to himself, almost until it was too late. We got lucky in many ways. A lot of things that could have gone worse did not. Nonetheless, the previous year was a nightmare, an ordeal. All too often, I felt like my body, mind, and heart were being broken open against a shore made of sharp and unforgiving granite. Still, there was also light from time to time. Forseti was more present than I'd have thought possible, especially in my father's last few days. Strange things can happen in hospice during the phenomena called "nearing death awareness." I very much recommend the book "Final Gifts: Understanding the Special Awareness, Needs, and Communications of the Dying." Actually, I cannot recommend this book enough.

More than ever, I know our Gods to be real Gods. They care for us and are active in the present. While I have given thought to sharing what might be called my "Heathen hospice experience," I also find that much goes beyond mere words. My instinct is to hold these experiences close. So far, I have shared my more detailed written account with a few close friends and have been content to leave it at that.

I am now even less interested in religious labels than I ever was before. I worship Forseti. He is my God and my compass. The rest, all the human boxes, do not matter in the slightest. He was there in the dark, shining as the sun.